What are Uterine Fibroids?

The female uterus is a complex reproductive organ with a unique anatomy. The basic structure is made up of layers: the outer-most layer is called the peritoneum and surrounds the thin, fluid-secreting perimetrium layer. Next is the myometrium, which consists of smooth muscle. The inner-most layer and lining of the uterine cavity is called the endometrium. The entire uterus is surrounded by an intricate system of blood vessels. The outer lining of cells of the endometrium sloughs off periodically if the female does not become pregnant; this shedding is responsible for menstrual bleeding.

Uterine fibroids (also called leiomyomas) grow from the smooth muscle and can be found on the peritoneum, within the myometrium and on the endometrium. These fibroids are non-cancerous growths which often develop during childbearing years, after a woman has gone through puberty. Although the exact cause is unknown, it appears that the hormone estrogen, which helps regulate the menstrual cycle, plays a key role in their growth. 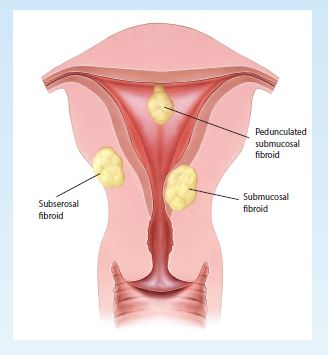 Uterine fibroids are extremely common, affecting many women at some point in their lives. Most of the time, uterine fibroids can be so small they do not cause any physiological problems and go unnoticed. Fibroids can also grow very large, possibly filling up the uterine cavity and weighing several pounds. As long as a woman with fibroids is menstruating, a fibroid will probably continue to grow. When estrogen levels fall after menopause, fibroids can shrink.

Inflammation is involved in reproductive events such as ovulation, menstruation and implantation. Regulation and resolution of inflammatory pathways is necessary for proper reproductive function, and the onset of reproductive disorders may be the result of malfunctioned or persistent inflammation.1 The commonality of fibroids and the universality of menstruation has led to an increasing belief that injury related to menses may cause an improper inflammatory response leading to the formation of uterine fibroids.2,3

Uterine fibroids develop from the smooth muscle of the myometrium. A single cell reproduces repeatedly, eventually creating a pale, firm, rubbery mass. Medical research is working to identify the cause of fibroids, but some contributing factors are evident:

Risk of developing uterine fibroids also increases with other factors:

Uterine fibroid symptoms can emerge slowly over years or rapidly in several months. Most women with uterine fibroids show mild or no symptoms and do not require treatment. Symptoms can pose a problem for some, and the location of the fibroid usually influences the types of symptoms present. The most common symptoms include:

Uterine fibroids can cause multiple complications with pregnancy but it is not common. Sometimes, fibroids can make it difficult to become pregnant, creating infertility. During pregnancy, existing fibroids may grow due to the increased blood flow and estrogen levels. Large fibroids in the uterine cavity can cause abnormal fetal positions and placenta problems. If fibroids block the birth canal then a cesarean section delivery may be necessary. Uterine fibroids increase the risk for miscarriage, and premature labor and delivery. Pain and excessive bleeding after childbirth are also seen.

Other complications of fibroids include:

There is no single, best approach to uterine fibroid treatment. Medical treatment is usually only sought when symptoms are too severe and pose health risks. If you have uterine fibroids with little or no symptoms or are nearing menopause, it is typically recommended to have regular pelvic exams to monitor the fibroid growth and symptoms; this is often referred to as watchful waiting.

Several medications are used to relieve symptoms, but they do not shrink fibroids. These include:

Many surgical procedures are used to remove fibroids from the uterus. The type of operation is dependent upon the location and size of the fibroids, as well as the severity of symptoms. Procedures include:

OTHER TREATMENTS >>
References: 1. Jabbour HN, Sales KJ, Catalano RD, et al. Inflammatory pathways in female reproductive health and disease. Reproduction. 2009; 138:903-919. 2. Flake GP, Andersen J, Dixon D. Etiology and Pathogenesis of Uterine Leiomyomas: A Review. Env Health Persp. 2003; 111(8):1037-1054. 4. Maybin JA, Critchley HO, Jabbour HN. Inflammatory pathways in endometrial disorders. Mol Cell Endocrinol. 2010; [Epub ahead of print]. 5. Sozen I, Arici A. Interactions of cytokines, growth factors, and the extracellular matrix in the cellular biology of uterine leiomyomata. Fertil Steril. 2002; 78(1):1-12.
The contents of inflammation-systemicenzymes.com website, including images, graphics, text and other material, are for informational purposes only. The content on the site is not intended to be a substitute for professional medical advice, diagnosis, or treatment. Always seek the advice of your healthcare professional with any questions you may have regarding a medical condition. Never disregard professional medical advice or delay in seeking it because of something you have read on the inflammation-systemicenzymes.com website. If you think you may have a medical emergency, call your doctor or 911 immediately.